Excellent news from Heceg Novi, Montenegro where Carmarthenshire Karate’s chief instructor, Mair Phillips has become Wales’ first ever European qualified Kata Judge after successfully completing her theory and practical examinations at the European Championships for Regions. Not only is she now Wales’ first and only kata official, she is the first woman in the whole of the United Kingdom to hold the licence.

Mair started adding judging and refereeing to her long list of karate skills in 2002 and has risen through the ranks of Welsh National levels, British levels and now European level, which means that she can officiate all over Europe at the three continental championships that take place every year and also the new series of Karate1 Premier League events run by the World Karate Federation.

In addition to Mair’s existing European Kumite Judge qualification, this new badge will bring back invaluable knowledge and experience for all of Carmarthenshire Karate’s members, but especially the group’s growing squad who regularly compete at events up and down the country. 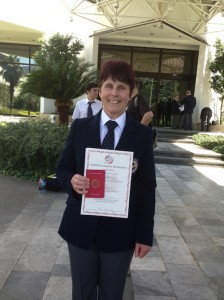