The big talking point from this, the last West Wales Course with Hanshi Spanton of the year was Alice Bennett’s successful grading examination to 2nd kyu.

Before that, we all had the benefit of a packed weekend course with Peter Spanton (8th Dan), which started with a dedicated brown and black belt session at the Avan Valley dojo on Thursday evening.

Another intense session followed the following evening before the full Saturday course in Narberth dojo, culminating in a senior grading examination for brown and black belt candidates. Among them were three of Carmarthenshire Karate’s members – Rhys Jones, Ethan Young and Alice Bennett.

Alice did the job, moving up to the second of three brown belts (2nd kyu) and continuing on that path to black belt. Rhys and Ethan were desperately unlucky not to reach their goal but were given permission to re-attempt in one month. 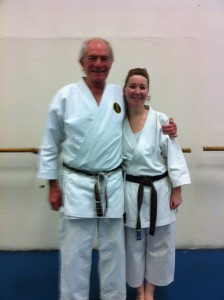