We’re delighted to report on another successful senior grading examination by Hanshi Peter Spanton (9th Dan) at our Carmarthen dojo this weekend. Following a kata course with Hanshi Spanton, five of our senior students were put to the test in front of him. Both Ben Williams and Catrin Jones achieved their 1st Dan black belts, while Gareth Thomas, Max Ryan-Davies and Sarah Phillips all progressed to 1st kyu – their final brown belts. Congratulations to all of them. 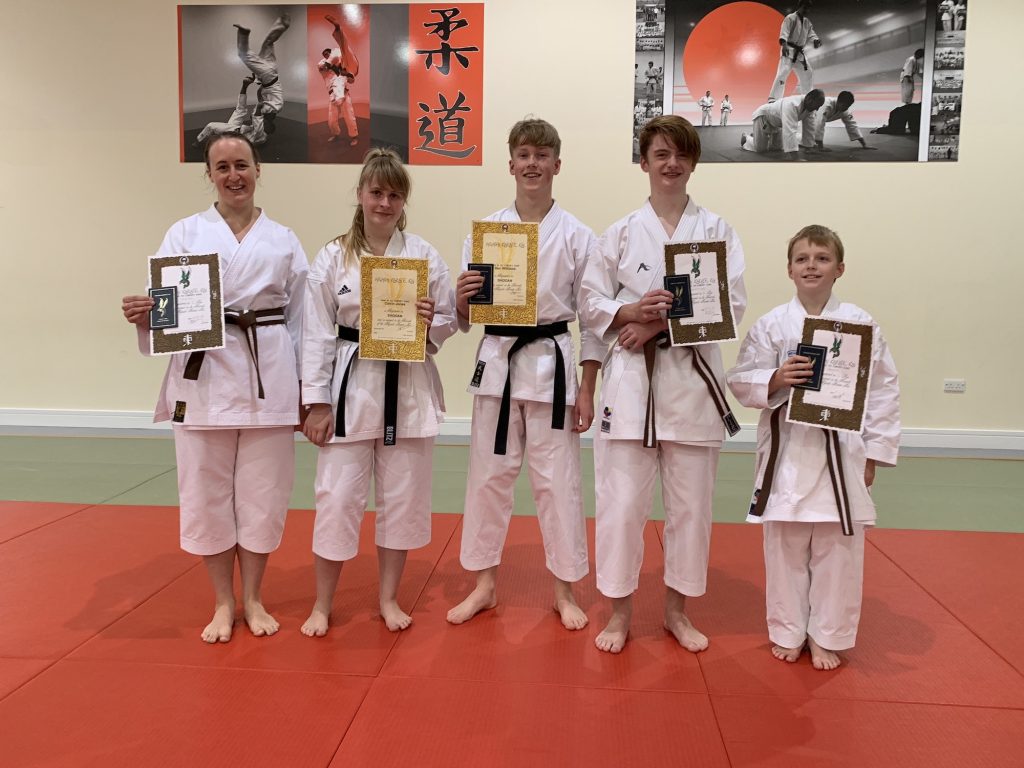 Ben was one of the very first members to join our new dojo at Cefneithin Karate Club on its opening night in January 2011 and he’s been one of our most faithful students ever since, training at both Carmarthen and Cross Hands dojos too, up to four times a week. Having been a core member of our squad for several years, competing in both kata, kumite and team events, Ben achieved recognition earlier this year, for his success at several National Championships with selection to represent Wales at the European Championships for cadets, juniors and U21 taking place in Denmark in February 2019. His ultimate reward for hard work and dedication was still to come though and Ben made sure that he finished the year in style, giving everything that he could in front of Hanshi Spanton to earn his black belt.

Catrin started her karate journey as a nine year old child at our Carmarthen Karate Club and like all young students she was training back then just once a week. About a year went by and she achieved her yellow belt (7th kyu), with her progress continuing steadily for the next few years. When she got to her first brown belt (3rd kyu) in early 2017 at the age of fourteen there was a substantial change in attitude and determination, which is always an exciting time for both student and instructor. Her next grading was to be her 2nd kyu and by the end of 2017 Catrin faced her first grading with Hanshi Spanton and passed with a first class pass. This followed with another first class pass to 1st kyu, which allowed her the opportunity to attempt her black belt grading within the same year. Catrin’s dedicated training paid off with the achievement of gaining her Shodan (1st Dan) at the age of sixteen in front of Hanshi Spanton.